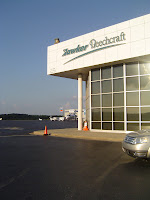 This is the Fixed Base Operator (FBO) at KPDK (Peachtree DeKalb, GA). On the corner of the building you can see the "lat long" of the building. Due to the increasingly frequent use of GPS in aviation, this information comes in handy for pilots initializing their Flight Management Systems (FMS). They can plug in these numbers so that the GPS can find itself and accurately plot the route to their destination.

What is "lat long" or latitude and longitude?

When looking at a map, latitude lines run horizontally. Latitude lines are also known as parallels since they are parallel and are an equal distant from each other. Each degree of latitude is approximately 69 miles (111 km) apart; there is a variation due to the fact that the earth is not a perfect sphere but an oblate ellipsoid (slightly egg-shaped). To remember latitude, imagine them as the horizontal rungs of a ladder ("ladder-tude"). Degrees latitude are numbered from 0° to 90° north and south. Zero degrees is the equator, the imaginary line which divides our planet into the northern and southern hemispheres. 90° north is the North Pole and 90° south is the South Pole.

The vertical longitude lines are also known as meridians. They converge at the poles and are widest at the equator (about 69 miles or 111 km apart). Zero degrees longitude is located at Greenwich, England (0°). The degrees continue 180° east and 180° west where they meet and form the International Date Line in the Pacific Ocean. Greenwich, the site of the British Royal Greenwich Observatory, was established as the site of the Prime Meridian by an international conference in 1884.

To precisely locate points on the earth's surface, degrees longitude and latitude have been divided into minutes (') and seconds ("). There are 60 minutes in each degree. Each minute is divided into 60 seconds. Seconds can be further divided into tenths, hundredths, or even thousandths. For example, the U.S. Capitol is located at 38°53'23"N , 77°00'27"W (38 degrees, 53 minutes, and 23 seconds north of the equator and 77 degrees, no minutes and 27 seconds west of the meridian passing through Greenwich, England).

Also, Hawker Beechcraft is the company that makes the Beechjet, which is the airplane I fly.