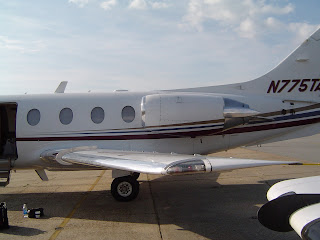 I said in my post yesterday that the Beechjet is faster than the Citation V. Both of these aircraft have Pratt and Whitney JT15D-5s. So why the performance differences of faster cruise speeds at altitude of the BE400 and shorter landing distances of the CE560?

The two aircraft have a different wing design. The Be400 has swept wings as opposed to the straighter wings of a Ce560. Above is the Be400, and below is the Ce560. Both pictures are taken at right angles to the fuselage, but look how far back the Beechjet's wings go. 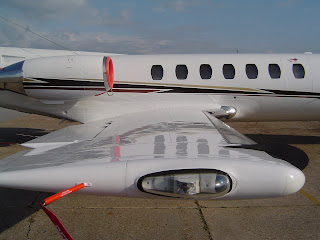 Wikipedia says: A swept-wing is a wing planform common on high-speed aircraft. A swept-wing is typically swept back, instead of being set at right angles to the fuselage. They were initially used only on fighter aircraft, but have since become almost universal on jets, including airliners and business jets.

When we climb to altitude at full throttle, there is no hesitation - we go right up at 250knots until passing FL300, a nice change from the Citation. But I have had to learn to compensate for the low speed handling issues that swept wings generate. Below a certain speed, the wing simply quits flying, so power on approaches are required (don't pull the power back too early or "thump.")