Najla is the recipient of our 2013 Spring Scholarship Program Dreams Take Flight Award. Please see her application essay here and read about the Summer Scholarship Program. We will be accepting applications until June 30th, 2013. Our scholarships are funded by direct contributions from people like you!

"My experience as a student pilot has been an adventure. Learning to fly presents many frustrating challenges as well as enthusiastic accomplishments. My flight lesson on May 18th captured those two aspects as I landed the plane for the 1st time after numerous unsuccessful attempts. 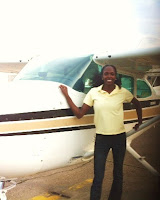 5/18/2013 Before my lesson began today, my flight instructor told me we would be staying in the traffic pattern to work on landings….AGAIN. I have been working on landings for the past three weeks now. It has been a trying task to complete but I am determined to see it through. I had done well in the basic maneuvers, such as climbs, stalls, turns, etc., so now I just needed to land the aircraft proficiently in order to solo. We took off on runway 33 and the winds were light and variable. As we flew upwind, I had complete control of the plane while my instructor observed with a careful eye. I turned onto downwind, leveled off at traffic pattern altitude, and requested the option from ATC. They cleared me for the option and I began my descent with 10° of flaps extended. I then turned onto base and put in 20° of flaps while still maintaining sole control of the aircraft. 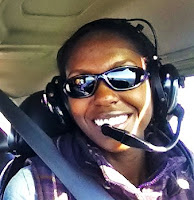 Now onto the final leg; my 30° of flaps were in and I’m just atop the runway. My instructor tells me to level off but it was too late. My nose wheel hit the ground with a thud and bounced. My instructor quickly recovered before we went into a porpoise affect. The 2nd & 3rd attempts at landing resulted in me leveling off too soon and almost taking off instead of landing due to ground effect. I guess the 4th time was a charm because I landed perfectly with no help from my CFI. As I was right over the tarmac on final approach, I looked straight down the runway, had the desired site picture in view and leveled off. I glanced in and out of the cockpit between the airspeed indicator and the end of the runway. The airspeed began to bleed off and the stall warning horn sounded. The main wheels landed softly on the runway just before the nose wheel. I gave out a quiet ‘Yes” to myself and then remembered to breathe. I had finally landed the plane after many hours of practice, practice, practice. This was definitely one of the greatest moments in my flight training and most exciting achievement of a lifetime.

Currently, my landings are continuously improving and I have my solo stage check evaluation next week."