This weekend I traveled to Indianapolis to participate in "Just Girls... From Fashion to Rocket Science" for girls in grades 6 to 12. The weather put a real damper on the event (though it wasn't nearly as bad as what fell on the east coast). I know personally drove 7 hours because the snowstorm impeded my progress. And on Saturday morning, few people ventured out until the roads were completely clear which meant that many of the exhibitors and most families didn't show up. The girls who did attend spent the time just milling around the tables at the periphery of the room.

I did a couple of short 15 minute presentations to the crowd, but at my table I had a G1000 (Glass cockpit) poster to demonstrate to the girls a quick primer on what that "stuff" in the cockpit is for (usually I take an hour to present the whole Girls With Wings seminar).

I started out by just letting them look at the poster, at which most of them just shrugged. I asked them if this was too intimidating for them to figure it out. A few girls said that if given time they could probably come up with what everything was for (yea!), but most girls said they thought it would be too hard.

So I issued them a challenge. I said I was going to ask them ONE question, and if they got it right I would know that they had the aptitude to be a pilot.

I pointed out where the pilot would sit (on the left) and the screen she would be looking at. So, I asked, "Why would this screen be colored blue up here?" Most of the girls immediately said the sky, although a couple said the ocean - at that point I further pointed out the brown and led them along a little longer. But I was able to say to them, "See, you have the potential to get this stuff!" 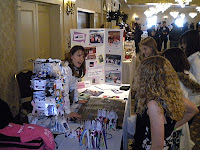 Once they understood that represented the sky and ground, I pointed out the airplane indicator and said, "If each of those yellow lines represents a wing, what do you think your airplane would be doing if the left line was below the horizon (that was another learning point) and the other was above?" The majority of the girls got that the airplane would be turning with no other hints. Some of the girls needed a little more pushing. We then went on to briefly talk about the other instruments, I'm not kidding you, some of these girls must have been in an airplane before - they had NO problem figuring it all out with little assistance from me.

However, there were a couple of girls (more than I would have liked) that preferred to answer every question with a shrug or a giggle or just plain wouldn't even look at the poster to hazard a guess. These are the girls who I think could most benefit from the Girls With Wings presentation. We cannot teach our girls to be afraid to try or pretend that they can't figure things out! I had to coax them into feeling comfortable doing so in front of just lil ole me. No way they could have done this under any pressure or public observation.

The next morning I had cause to reflect on this further as I listened to NPR Sunday Puzzle show. Each week Liane Hansen moderates this short episode of word play games. A challenge is given out at the end of the last show and people mail in their answer. The winner then comes on the next week's show to participate in the on air quiz given by "Puzzle Master Will Shortz." Some of the quizzes get pretty difficult but Leann is usually able to contribute a hint to clue in each guest if not outright answer. This week:

Every answer today is a word used in football. Given three words, you give a word that can follow each to give a familiar two word phrase. The answer will always be a football term. For example, if the clue is "year, tag and dead," the answer would be "end."

Now, I don't know if I was paying more attention because I had just had the experience at the Girls Show or whether Leann was playing "dumb" because this was a sports oriented quiz, but one of the first questions was, "prison, national, rear." The contestant couldn't answer, so asked Leann for help. She says, "Alright, for someone who doesn't know much about football..." You could hear her begin with "is it G_," and then hesitate. Then she says, "...uh, Guard. No..." It was so obvious that she KNEW! Was she just trying to save the contestant's feelings? It was a guy, by the way. And at the end of the puzzle, she says sheepishly, "I know nothing about football." Isn't that perfectly ok that she doesn't (even though it was obvious she did)? She's clearly a genius and successful in so many other ways...

So what do you think? Why do we women and girls have to do this to ourselves?