The Old Rhinebeck Aerodrome hosted our August Girls With Wings Representative Training session and NY Club Formation (currently covers the NE US). I would like to thank Aerodrome Vice President Don Fleming who went above and beyond all of my expectations to make this possible. Doing a google search on Girls With Wings and the Aerodrome will show you just how much work he did on publicizing the event (while I printed out documents and laminated "game" pieces). This event is going to be difficult to beat! 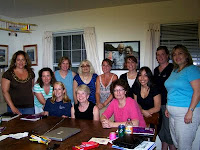 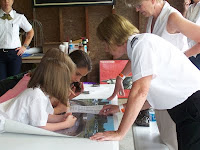 Despite the high heat and ENORMOUS humidity (I didn't realize NY shared weather patterns and mosquito swarms with the jungles of Central America), the event was a great success. We were able to meet inside on Saturday night inside the Cole Palen house on the grounds of the aerodrome to run through how the Girls With Wings presentation is structured, as well as our goals into spreading the positive message of GWW through other outreach activities. A lot of what we focus on is sharing our personal stories of our challenges and successes so that we are able to relay them to the girls we meet. Birdie, the GWW Club Leader shown at right helping the girls with their cockpit posters, will be coordinating the meetings and future events of the club. 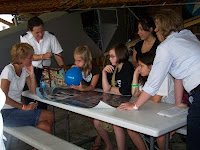 Sunday morning we set up in one of the antique airplane hangars to present first to girls younger than 12, and another one later for the older girls. The weather was iffy the whole morning (which had caused the Saturday airshow to be canceled), so fewer people than expected showed up at the aerodrome that morning. However, we did have a great time with the girls, teaching them "everything" they need to know to conduct a flight to Orlando, FL, so they could attend Disneyworld. They even put "fuel" in their "engines" so they could see their "airplanes" take flight. [Also, as you can see, the older "girls" - also known as moms - participate in the presentation and learn some new things as well.] The presentation depends largely on the girls' participation, which is facilitated by only having girls in the group (boys at the same age are usually much more assertive and cause the girls to be too shy to offer input). We don't give away any answers here, the girls are given just enough information to figure it out by themselves! 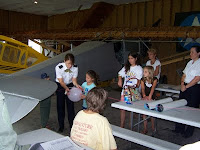 As you can see, the hangar was a bit crowded, but who could complain working so closely with fabric covered aircraft? [Although I have to admit, I was somewhat distracted during the presentation ensuring no one tested the durability of these antiques.] Fortunately, no damage was done to the airplanes (though I did end up with a lot of grease on my uniform pants...) Unfortunately, not one of the girls' airplanes made it to Florida non-stop. [Could it have been the adverse weather conditions creating an unusually high density altitude??] However, the illustration was successful, that these girls, who initially thought they'd NEVER be able to figure out how all of that "stuff" up in the cockpit worked, were able to read their flight instruments and make radio calls, just like the women pilots that were there to help them learn new things (and that includes sharing a little insight into what their opportunities for their future). 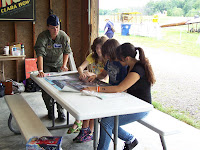 During the second presentation for the older girls, we could get a little more in-depth into some of the concepts of conducting our flight. The ease with which the girls pick up the radio transmissions and instruments allow us time to talk more about our background for our careers/hobbies and additional scientific principles in flight. We do the presentations in approximately an hour, which doesn't leave a lot of time to get into aerodynamics or the like. But we feel that it's better to just give the girls a glimpse into the different subjects and allow them to pursue them more later. And yes, the older girls do the balloon "flight" as well. It's a little corny, but it's a great finishing touch ...and all of the older girls had their balloon make it to "Florida," which dispelled my density altitude theory since it was even warmer now than it was for the earlier presentation (I wouldn't have thought this possible). By my expression, you

could see I was a little worried how this would come out. At the end of the presentations we also tell the girls about the Young Eagles so they have the opportunity to pursue a real flight. The EAA Young Eagles program was launched in 1992 to give interested young people, ages 8 - 17, an opportunity to go flying in a general aviation airplane. These flights are offered free of charge and are made possible through the generosity of EAA member volunteers. 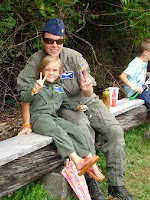 Lesson learned: August was probably not the best month to hold this event since it was hard to get a hold of Scouting and school groups so I am really grateful for the families that made the effort to come out despite the heat. Having worn a flight suit for the Army for many years, I sympathize with MAJ Sheila wearing her USAF uniform. Her young daughter, Daniella, was also supporting a military uniform (albeit with flowery flip flops, which are prohibited in the regulations). It is Sheila's and other people's enthusiasm for and active participation in supporting Girls With Wings that has made everything we have accomplished possible. Our intent for this and other future Girls With Wings clubs is that members seek out more opportunities to increase awareness of our organization by presenting to girls' groups, as well as to gather new and existing aviation enthusiasts to encourage networking and support for each others' goals and dreams.

The best part of having the event where we did was that after the presentations the Rhinebeck Aerodrome show started. The weekend air shows are scheduled from mid-June through mid-October. On these weekends (weather permitting), the Aerodrome turns back the hands of time and relives the years of early aviation. The colorful era of early aviation is brought back to life amidst the roar of rotary engines and is great entertainment for all ages. 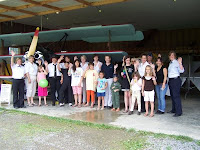 e Saturday Show, which was unfortunately canceled due to rain and a very muddy landing strip, would have chronicled the History of Flight with Pioneer, World War I and Lindbergh era aircraft taking to the skies. If the winds were calm we'd have even seen a1909 Bleriot (the oldest flying aircraft in the United States) take to the air. The Sunday Show featured a World War I dogfight plus Barnstorming Aircraft. Not only is this an incredible visual experience, but the sounds and smells of these antiques are unlike any you'll see at other airshows. 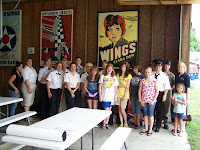 We have been invited back in future years to conduct more Girls With Wings presentations and due to the incredible support from the Aerodrome we certainly intend to! It is a wonderfully central location for the northeastern US and the contributions we received from the entire staff of the Aerodrome was amazing. Keep an eye on the NY Club page to see all of the great things this group of volunteers can accomplish. And please help spread the news about Girls With Wings to your local aviation and educational groups. We have undertaken a task that requires participation on all levels: women to do the presentations, groups to schedule them, donors to provide funding, and volunteers to help with the many administrative requirements. Send an email to volunteer@GirlsWithWings.com if you would like to help.