Not surprisingly, I've taken a while to post some Post-Oshkosh information. This week-long show, always at the end of July, is a crazy undertaking for Girls With Wings and the post-show recovery always takes a while. On top of that, I have also been preparing for our Girls With Wings training session at the Old Rhinebeck Aerodrome this weekend.

Our booth at Oshkosh has two purposes (at least). It's an opportunity for us to spread the word about the mission of Girls With Wings to the crowds attending the airshow. As you can see in this photo to the right, Girls With Wings is connecting the generations; the past and the future of aviation. I am not applying first aid to the arm of Bee Haydu, an amazing woman and former WASP pilot I met on the AirRace Classic, but applying a Girls With Wings tattoo. Observing intently is one of the many young, female attendees of the airshow that are so happy to see a space just for them (For my critics out there, the whole REST of the show is "Boys With Wings!").

Our undersized little booth (we really need a double booth but can't yet justify the additional expense), is a gathering place for our many supporters and friends. It also attracts new recruits all the time who say GWW is JUST what they've been looking for! It's a wonderful way for us to make new contacts and get more volunteers. At the end of every show I am completely exhausted, yet can't wait til next year.

Comment from EAA president Tom Poberezny: “I had high expectations for AirVenture 2009, but even those expectations were exceeded. After each event, you like to say it was the best ever, but you can’t do that every year. But I’m going to say it this year – AirVenture 2009 was the best ever. It’s difficult to imagine a week that matched the highlights, enthusiasm, and passion for aviation that we saw this year at Oshkosh.”

Great numbers, huh? But we are located inside Hangar A in booth 1006 and I daresay quite a few people didn't ever make it into the hangars, except of course, when it rained (which it often did this year). In fact, I estimate that I only gave away a couple thousand brochures. So there's a big portion of this audience we still didn't reach. Helping us to reach more of an audience is plugs like this on Aero News Network, which was recorded at our booth at the February's Women in Aviation Conference. Click to watch this great interview.

However, it is so great to see people making a special trip to the booth every year. A special treat is seeing those people who bring their kids back in their "Yes, Girls Can Fly!" t-shirt that they bought last year but is getting a bit too small. I also get to see in person the people who I have met on Twitter and Facebook or those folks that have been involved with Girls With Wings website from the start, but only in cyberspace. Or those folks I have known for a while and are looking for a chance to catch up. Unfortunately, the booth is too often mobbed by visitors and those buying Girls With Wings merchandise to take home with them for me to be able to chat. I am so bummed when I can't chat more - my sincere apologies to those who came by and felt neglected.

The Girls With Wings items that we sell in the booth and online help us to raise funds for the educational outreach program. The vast majority of funds are raised in a week at Oshkosh and must cover a year's worth of activities! So every year I spend a couple of months looking at what I sold last year (almost everything is also on the Girls With Wings online store) and reorder in the quantities that I think I'll be able to sell. However, it seems like every year something is more popular than last year. For example, the "Yes, Girls Can Fly!" tee in Lime was the big seller. Last year, it was turquoise. The "It's not how tall you are, it's how high you fly" tee sold out in the smaller sizes, so I ordered twice what I had last year, and they still all sold out! One might look at how busy the booth is and think we are really raking in the funds, but running an organization (especially a volunteer one) doesn't come cheap, and I can guarantee you that we need everyone's year round support.

I also get requests for different colors, specific airplanes, long sleeves, tall sizes, sleeveless, different materials, etc. So even though I try to make everyone happy, stocking a lot of variety and loading up a trailer with a ton of merchandise, I just haven't been able to please everyone. *Sigh* Every year there are a couple of folks who balk at the prices of the merchandise. I can assure you that I have a very small "profit" margin (or rather return on my investment) on selling these inspirational and motivational items. Far more people exclaim how reasonable the prices are, and are so pleased that their purchase is helping a good cause. 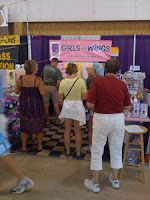 So, the booth helps us to get the word out and raise money for our mission. It also helps us to reconnect with old friends and make new ones. But none of this would be possible without the support of many people.

So in chronological order, the following people deserve a huge thank you for their help in the booth over the course of the week:

Erika, an honorary Girl With Wings, who, at only 15 years of age, probably could have run the booth by herself after being there only 15 minutes.

Jodi, a Flight Instructor and Flight School Manager that was one of the original GWW supporters,

Chris, of the blog Lessons from the Cockpit,

Amy, who brought along her boyfriend Rich, who has been so kind to give advice on GWW issues,

Joyce and her daughter Alisa, who also agreed to be the depot station for extra brochures I had sent after the show started.

Laurence, a Girls With Wings Role Model, originally from France,

Lindsey, a Girls With Wings Role Model, and leader of the MN GWW Club, who brought along friend Ryan,

p.s. in case you haven't noticed, quite a few guys support the GWW mission. They also have a great time applying those GWW tattoos!

p.p.s. our GWW support is international!

Mary, who I met at my first 99s international conference and keep running into every so often, like at the AirRace (well, not literally "running into") and a former Air Traffic Controller,

Eric, Citation Shares pilot and EAA Radio Host, kind enough to record an interview of me talking about Girls With Wings (link to be posted later),

Robin, coincidentally a fellow Lakewoodite, though I only seem to meet up with her 500 miles away in Wisconsin,

and Gretchen, my Mama Bird during the AirRace classic and quite an impressive executive within the aviation industry. 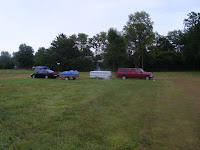 Last but not least, I must again thank my dad, without whom Girls With Wings would have never gotten "off the ground." He has been a tremendous sounding board, advice giver and hard worker. He was there from the beginning, literally and figuratively, as it was his reflection that he regretted not pursuing many endeavors over the years that launched my jump into pursuing my dream of the Girls With Wings organization. Literally, because he shows up at Oshkosh every year to help me set up and is with me until tear down. In fact, he and I were very nearly the last souls on Camp Scholler as we pulled out of there with my trailer full of displays and unsold merchandise (all those turquoise t-shirts, darnit!) and he with a camper he borrowed from his friend Doug (so another thank you to Doug!) to keep us dry during those inevitable rainshowers.

Thank you everyone for your support! I'll see some of you this weekend in Rhinebeck, NY, perhaps some more of you at the AOPA Summit in November. In the interim, I'll be plugging away at all of the behind the scenes work of Girls With Wings, reviewing our Scholarship applications, and scheduling more presentations teaching girls "everything" we pilots need to know to take to the skies!