If you are not a pilot, but get my tweets and my facebook posts, you've seen me referring often to Oshkosh. Non-pilots usually follow this with, "B'gosh." Oshkosh B'gosh is a children's clothing company. Oshkosh, as it is generally known, is officially EAA AirVenture, which takes place in Oshkosh, WI, every year. Oshkosh is the location of the EAA (or Experimental Aircraft Association) Museum.

rom the Oshkosh Convention and Visitor's Bureau: Set your sights on the Air Adventure Museum and travel in to the fascinating world of flight! There's something for every age and interest. Barnstormers. Fighter pilots. "Aces." World record setters. And airplanes that capture aviation's exciting and colorful history. Plus five theaters, photo and art galleries, unique gift shops, audiovisual presentations and more! Nearly 100 rare, unusual and significant airplanes. Named by the state of Wisconsin as a "Wisconsin Treasure."

But this once a year, "World's Greatest Aviation Celebration," which

happens the last week of July, is a sight that has to be seen to be believed. "The first gathering was in September 1953 as a small part of the Milwaukee (Wis.) Air Pageant. That original EAA fly-in at Wright-Curtiss (now Timmerman) Field was attended by a handful of airplanes, mostly homebuilt and modified aircraft. Fewer than 150 people registered as visitors. The larger Milwaukee Air Pageant has faded away but the EAA gathering has become the world's premier aviation event." Read how it moved to Oshkosh here. (The text is from these pages.)

"Through the 1970s and '80s, the Convention exploded into national prominence. Attendance jumped into six figures each

year and the event became one of sport aviation's top gatherings. EAA AirVenture Oshkosh (as of 1998, the new name for the Fly-In Convention) now serves as one of the world's premier aviation events, attracting top government officials, corporate leaders and hundreds of thousands of aviation enthusiasts. It spans the entire spectrum of aviation and attracts 10,000 airplanes each year. The more than 500,000 aviation enthusiasts who attend the event annually supply the local and state economies with more than a $110-million boost during the week-long event."

"Today, EAA AirVenture Oshkosh is an international gathering place for aviation enthusiasts. An AirVenture participant can study the latest aircraft and innovations; discover new ideas and techniques from the nearly 1,000 forums and workshops; see aviation's top personalities; or just talk airplanes with people from around the world. EAA AIRVENTURE OSHKOSH has become important and influential but retains its friendly and personal feel - part of the reason the world comes to Oshkosh every year."

This will be my fourth year at Oshkosh having a Girls With Wings booth to do fundraising for our educational programs and scholarship. It is a busy week, and I would like to say I have all the bugs worked out, but... not hardly. To the left is the 2nd year, where I had all kinds of racks - I know now just to have bins of tees clearly separated by size so that people can find what they need. If not, a lot of the time we could be spending talking to people (everyone has a great story to share) is spent digging around knee deep in "Yes, Girls Can Fly!" Tees. It's still crowded in the booth, but real estate at Osh doesn't come cheap and the price of a double booth is cost prohibitive. 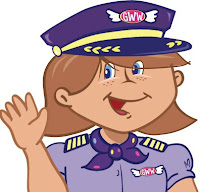 This was also the year that I tried something novel, and had the volunteer workers wearing pilot shirts with epaulets like our mascot, Penelope. It was bad enough that people visiting the booth acted so surprised when women at the GWW booth were actually pilots (many of my friends fly commercially even, so it was fun watching jaws drop when I pointed out that "she flies the Airbus, she flies the 717," etc.), but with the "costume" people treated us like Bud Light Beer Girls! So we're back to just regular shorts and tee shirts. Because, of course, it is hot in Wisconsin in July. In the hangar we at least get some release from the sun, but it can get rather stuffy.

The booth is open from 9-5 monday thru sunday, and I rely on the generosity of volunteers to help me, and my dad - the greatest GWW supporter I know, handle the traffic. I am always exhausted after the week; camping at Camp Scholler in Oshkosh is fun, but not the most restorative sleep. I am really looking forward to a new feature this year, too. All of the aviation nuts, and now friends, that I have made via twitter (I met some of them at Sun n Fun). I would try to list them all, but I might miss one and inadvertently hurt feelings. You KNOW who you are! And if you haven't been to Oshkosh, you really must go, at least once in your lifetime (if "once" is possible). I look forward to it every year. It. Is. Amazing.

And, now, I must shut down the computer and take a shower, finish loading up the car (the trailer's been loaded for days) and hit the road. I have a long drive ahead of me and it is supposed to rain the whole way from Cleveland to Oshkosh. If YOU are going to be at Oshkosh, please stop by Hangar A, Booth 1006 and buy a tee to help support Girls With Wings. Or stick around for a while and hand out brochures and put temporary tattoos on the girls (of all ages, BTW, I got them for the little girls, but the "big" girls like 'em too!). We can use your help!