Do you need feet to fly?

I was telling my accountant the other day that I was going to have to fly in place of someone who had hurt his foot. She laughed, thinking that I was joking. When I told her I wasn't, she told me that she didn't think that people needed feet to fly.

The answer is that yes, you do! Uh, well, sometimes. More complex aircraft have an autopilot and/or yaw damper system so that you can in cruise flight take your feet off of the pedals, but everyone needs to use their rudder pedals for takeoff and landing. Helicopter pilots use their pedals (called anti-torque pedals) to counteract the torque of the main rotor. Remember Newton's Law of "For every action there is an equal but opposite reaction?" See: http://en.wikipedia.org/wiki/Newtons_laws. It would be nauseating to be spinning in the opposite direction of the rotor blades.
And, more importantly, there are also organizations, like Able Flight http://ableflight.org/, that promote flying for people with disabilities. That includes not having, or not having use of, feet.

The rudder controls the movement of the aircraft around its vertical axis. The rudder is one of three primary flight control surfaces found on an airplane. It is a movable surface hinged to the fixed surface that is located at the rear of the aircraft called the vertical stabilizer, or fin. The rudder controls movement of the airplane about its vertical axis and causes the airplane's nose to move to the right or left and point in a different direction. This motion is called "yaw."
Control cables connect the rudder to the rudder pedals. Pushing down the right rudder pedal moves the rudder to the right and causes the plane to turn to the right. Pushing down the left rudder pedal turns the plane to the left.
That's a pretty simple explanation, especially since it can be said pilots primarily use the ailerons to turn the aircraft in most cases. Ailerons are deflected on the wing to change the amount of lift produced by one wing. Read on to learn more.
Wikipedia, as usual, says it better (But I wanted to make a pitch for the Centennial of Flight Website, they have some cool stuff).

On an aircraft, the rudder is called a "control surface" along with the rudder-like elevator (attached to horizontal tail structure) and ailerons (attached to the wings) that control pitch and roll. The rudder is usually attached to the fin (or vertical stabilizer) which allows the pilot to control yaw in the horizontal axis, ie change the horizontal direction in which the nose is pointing. The rudder's direction is manipulated with the movement of foot pedals by the pilot.

In practice, both aileron and rudder control input are used together to turn an aircraft, the ailerons imparting roll, the rudder imparting yaw, and also compensating for a phenomenon called adverse yaw. Adverse yaw is readily seen if the ailerons alone are used for a turn. The downward moving aileron acts like a flap, generating more lift for one wing, and therefore more drag. Initially, this drag yaws the aircraft in the direction opposite to the desired course. A rudder alone will turn a conventional fixed wing aircraft, but much more slowly than if ailerons are also used in conjunction. 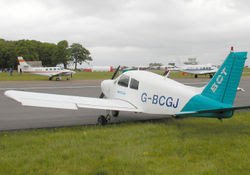 Ailerons are the trailing-edge control surface nearest the wing tip (although on some airliners they can also be found at the wing root). On this parked Piper Cherokee the aileron has deflected downwards.

Use of rudder and ailerons together produces co-ordinated turns, in which the longitudinal axis of the aircraft is in line with the arc of the turn, neither slipping (under-ruddered), nor skidding (over-ruddered). Improperly ruddered turns at low speed can precipitate a spin which can be dangerous at low altitudes.

Sometimes pilots may intentionally operate the rudder and ailerons in opposite directions in a maneuver called a forward slip. This may be done to overcome crosswinds and keep the fuselage in line with the runway, or to more rapidly lose altitude by increasing drag, or both.